Journey with us through Ghana as we take you to the depths of the West African country for the trip of a lifetime! In 10 days, you’ll visit the most significant locations and hotspots in Ghana and experience the beauty and vibrancy of Ghanaian culture at its finest. From the Kintampo Waterfuls to the Mole National Park, all the way to the reserve parks, you’ll get the chance to see our flora and fauna in its natural habitat. All this awaits you and more!

A tour guide will be waiting for you at Kotoka International Airport in Accra, Ghana. He will drive you to the hotel whereupon the friendly hotel staff will greet you. An orientation will take place 20 minutes later, outlining the trip and what you can expect from your stay. You will then be taken to your hotel room.
Day 02

We will start our tour after an early morning breakfast. You will first be taken to the W.E.B Du Bois Center of Pan-Africanism where you’ll see various artifacts that depict the struggles of Africans during Africa’s emancipation. From there, we’ll proceed to the Independence Square where you’ll visit the Independence Arch, a significant symbol of Ghana’s freedom. Then you will be taken to the final resting place of Kwame Nkrumah, the first president of Ghana. After paying respects to the great man, you will be taken to lunch. Afterwards, we will go to the Casket Shop where you’ll see how different caskets are made, in different shapes and styles, each depicting the deceased’s profession. Then we’ll head back to the hotel for dinner and an overnight stay.
Day 03

After breakfast, we will travel through the central region and head towards Cape Coast. During the trip, you’ll have the chance to get a window-view of the towns and villages. Upon reaching Cape Coast Castle, you will be given a tour of the castle grounds as well as the dungeon. You will also learn about the history of the Transatlantic Slave Trade and the role of Cape Coast Castle. We will also visit the West African Historical Museum, located within the castle. From here, we will proceed to the Kakum National Park. Once there, we’ll take you to have a special birds-eye view of the luscious forest by following the Canopy Walkway. 330 meters in length, the walkway hangs about 28-40 meters above the forest ground and gives you a beautiful panoramic view of the jungle and its flora and fauna. Afterwards, we’ll take you to Hans Cottage where you’ll enjoy dinner while viewing crocodiles. Then, we will continue to our hotel in Kumasi for dinner and an overnight stay.
Day 04

After an early morning breakfast, we’ll head straight to the Capital of the Ashanti Kingdom. Thee, you’ll visit the Manhyia Palace, which is the seat of Asantehene, where the King of the Ashanti resides. Here, you’ll learn about the Ashanti people and their culture and traditions. From there, we’ll proceed to the National Cultural Center to get some in-depth knowledge on the Ashanti people. We’ll also see artifacts that date back to the 1700s, including the 300-year old Treasure Bag of Okomfo Anokye, which has been barred from being opened. We’ll have lunch in the center’s restaurant, then head straight to the Kejetia Market where you’ll get the chance to buy Kente cloth, shoes, food and pottery from the many stalls there. Then we’ll head to our hotel in Kintampo for dinner and rest.
Day 05

We will depart early after breakfast for the Kintampo Waterfalls, one of Ghana’s most beautiful waterfalls, which also has a warm pool for bathing and swimming. After we enjoy the waterfalls, we’ll head to the north for the Northern Safari Expedition. After making a stopover along the route for lunch, we’ll continue in to Mole Natioanl Park. Upon arrival, we’ll check in at the Mole Motel and rest for a bit before heading through the park to enjoy our evening walking safari. After arriving back, you’ll have a chance to mingle with other people in the hotel and rest. Then we’ll have dinner and stay overnight.
Day 06

After a hearty breakfast, we’ll partake in the morning game ride. You’ll have a chance to see different wildlife in their natural habitat such as leopards, buffalos and elephants. As a special treat, we’ll proceed to the Larabanga Mosque after arriving from the morning fame ride. There, we shall witness one of the most ancient forms of architectural handwork, and have the chance to see one of the original Qurans that was sent there by the Holy Prophet Muhammad (P.B.U.H). From there, you will be taken to see the Legendary Stone of Larabanga. According to folklore, the mysterious massive stone would return to its original place, no matter how many times it was moved. As such, there had to be a road constructed around it, which led to a diversion in the road. Afterwards, you will be taken back to the motel for rest. During the evening, you’ll be taken to the Wooden House for bird watching. Then dinner will be served.
Day 07

Early morning, we will take you for a game drive around the park with a guide. You’ll see many animals up close such as birds, buffalos and leopards. Then we will have breakfast and some free time to rest. After lunch, we’ll have some more time to relax by the poolside. Come afternoon, we’ll take a canoe safari on the Mole River down the length of the park and back. Then arrive back at the motel for dinner and rest.
Day 08

We’ll depart early after breakfast for our visit to the Nalerigu Defense Wall, which is built in honor of Naa Jaringa, a man who wanted to defend his people from slave raiders. It is believed that the wall was made with mud, milk, honey and stones. What is more interesting is that this wall contains human skeletons as well, which many say are the skeletons of those who would complain of tiredness. After visiting the ruins of this magnificent defense wall, we’ll go for lunch then continue to Wechiau, located in the Upper West Region of the country. We’ll check-in our hotel in Wa, have dinner then rest.
Day 09

After a full night’s sleep, we’ll depart in the morning after breakfast for the Wechiau Hippopotamus Sanctuary. Here, you’ll see the amazing reserves that were made to protect and preserve the endangered Hippopotamus. We’ll view these magnificent creatures by partaking in a canoe safari on Black Volta, a river that flows from Burkina Faso to Dagbon’s White Volta. You’ll see other animals frolicking around as well. After we’ve had lunch, we’ll begin our journey back to Accra. Dinner will be had during the route.
Day 10

We’ll cap off your final day in Ghana with an energetic breakfast and some last-minute visits to the National Cultural Center and Arts Center for some shopping. Here, you’ll have the chance to buy some souvenirs such as wood carvings, sculptures and gorgeous kente. After coming back to the hotel, you’ll have some time to rest before heading to the Kotoka International Airport, where your tour guide will help you check-in for departure.
book now

Thank You. Your booking have received and booking number is 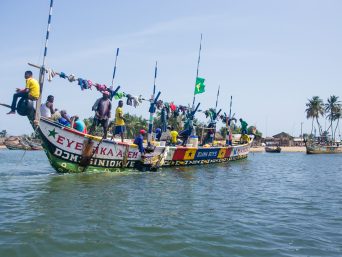 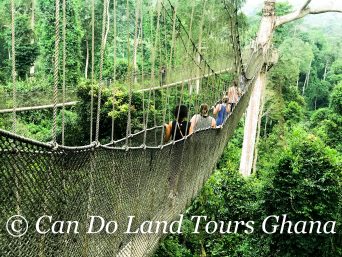 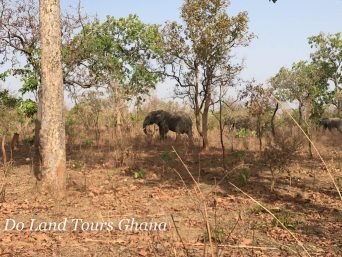 Friends of Nature and Wildlife